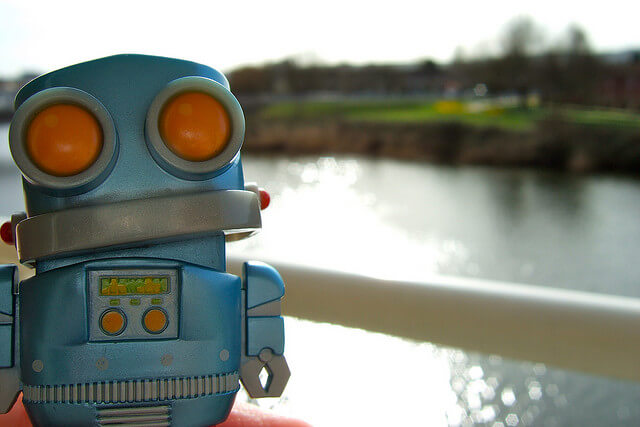 In their vision of the future, passengers will no longer deal with check-in desks – an innovation already making inroads in many airports.

To take that even further, Thales has designed a machine that not only scans passports and prints boarding passes, but also records an image of the passenger’s face and iris, which are then shared with computers around the airport.

The images are already in the system when the passenger arrives at the immigration desk, allowing a tall, white robot to automatically confirm the person’s identity without the need for human border staff.

You would only need one agent for every four or five machines,” said Pascal Zenoni, a Thales manager presenting the equipment at the air show. “These systems can free up staff for the police and create more space in the airport,” he added.

The passenger’s face is also printed in encrypted form on the boarding pass so that it can be scanned by staff at the gate for a final identity check.

Thales hopes to build on its expertise as the maker of biometric passports and ID cards for 25 countries, including France.

Meanwhile, in another air show stand, competitors Safran discussed their new systems for coping with the giant amount of data being collected on passengers.

Their new analytical system from subsidiary Morpho, which begins live testing in France in September, is expected to gather data on more than 100 million passengers from up to 230 airlines per year.

It sifts through the records, checking against over 300 behavioral “warning signs” – signals the company is loathe to discuss in detail. It also checks it against Interpol and other police records, searching primarily for terrorists and organized criminals.

Morpho is a world leader in criminal identification, running biometric systems for the FBI and other clients.

Although similar systems already exist at airports in the United States, Safran says current competitors throw up too many errant warnings, and can take months to alter.

“Our priority has always been to reduce the number of false alarms,” said Samuel Fringant, from Morpho’s Security Division. “Our system adapts constantly from the information it receives.”

“That is necessary because you are always in a race between the people operating the system and people trying to cheat it,” added Luc Tombal, from the company’s border control business unit.

As well as France, the company is expected to finalize a deal in the coming months to provide the system to Estonia.

The Paris Air Show is the world’s top showcase for the aerospace industry, expected bring together over 2,000 exhibitors and 300,000 visitors as it runs through Sunday.